On Monday, July 20th, Forest County Master Gardener Volunteers met on the grounds of the Courthouse Square to begin a long-term project of identifying and documenting the various species of trees that are present on the Courthouse Square grounds.  The workshop was led by volunteer R.T. Krueger who shared his expertise as an UW-Madison Extension Master Naturalist volunteer.

Forest County has long had a strong sense of pride about the trees within the Courthouse Square and for many years our claim to fame was that the square offered one example of each of Wisconsin’s native trees.   In fact, a part of the Courthouse Square known as Memorial Park, created by a resolution of the Forest County Board in November of 1918, was meant to house a tree “planted, to the memory of each man or woman, whose home was In Forest county at the outbreak of the war, whose death may occur during the war or as a result of his or her service in the army or navy or any other department of our forces, and be it further, resolved, that each tree so planted shall bear a metallic plate with an inscription giving the name and rank of the person in whose memory it is planted” (Forest Republican. November 15, 1918).  Unfortunately, whether or not this project was implemented has been lost to time, as no current trees are identified as such.

The Forest County Master Gardener group intends to update the 1994 map belonging to the Forest County Forestry office that identifies various species and to mark each of the trees.  It is the hope that this information will be beneficial to both residents and visitors to the Courthouse Square as a source of pride in Forest County and downtown Crandon. 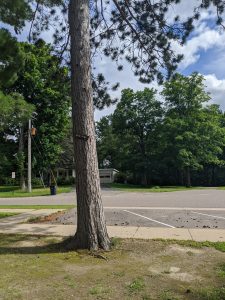 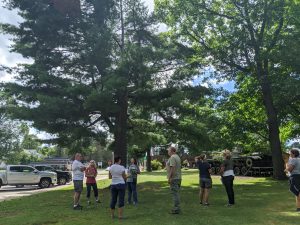 You are invited to follow along with Extension as we share the latest resources as they pertain to the COVID-19 outbreak and how Extension is responding via this page as well as the following website: https://fyi.extension.wisc.edu/covid19

We teach, learn, lead and serve, connecting people with the University of Wisconsin, and engaging with them in transforming lives and communities.

Connect with your County Extension Office »

Find an Extension employee in our staff directory »

An EEO/AA employer, University of Wisconsin-Madison Division of Extension provides equal opportunities in employment and programming, including Title VI, Title IX, the Americans with Disabilities Act (ADA) and Section 504 of the Rehabilitation Act requirements.